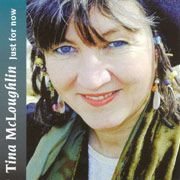 Tina’s first solo album ” Just For Now ” has recently been released on Claddagh Records and is already gaining an extremely positive critical response. BUY CD From Claddagh Record. Some of the tracks have audio samples below.

1. Water Under The Keel

I heard this piece played by the great uilleann piper Liam O’Flynn on the album The Brendan Voyage by Shaun Davy. To me it has a lovely strong melody in an almost classical context. Bearing this in mind, we arranged the tune for cello, guitar and whistle.

I was trying out a few tunes with Ian Melrose in my mothers house in the Winter of 1995 when this tune came into my head. Ian picked up on it with a jazz-waltz accompaniment, which eventually led to this arrangement for accordion , guitar and Dobro. I think this turned out really well.

I learned this tune from Ian who composed it while thinking of a particularly striking sunset over the industrial landscape by the river Clyde.

Tim O’Brien composed this song. I Heard a lovely version of it with vocals by Paul Byrne with Leo Rickard on Pipes. I am very pleased that we managed to create this attractive arrangement. Many thanks to Ian and to all the musicians on this track.

5. Fead On Iolair (The Eagle’s Whistle)

I used to play this tune with a traditional band called Clann Eadair from Howth, many years ago. It is a march, but here we play it at a much slower pace arranged for recorder, pipes and piano accordion.

The first tune is a popular jig that Ian arranged for guitar. The Stroller was quite a challenge for me – getting my fingers around some typical guitar phrases. It was worth it to see the look of surprise on Ian’s face when one day I started playing along with the tune.

The late Paddy Taylor, a well known flute player from Longhill, West Limerick, composed this tune. He lived most of his life in London. I learned it from Johnny Leary, an accordion player from Bantry in West Cork.

I learned this tune while playing with the traditional band Clann Eadair from Howth, Co.Dublin. It was written by Darach de Brun.

A reel written by Tommy Coen, also widely known as Tommy Coen’s Reel. I learned it in 1983 when I was living in West Cork, playing in regular sessions in Ballylickey in a pub called Green Acres, together with my favourite musicians, Johnny Leary, Noel Burke and Sandra Neff. Beautiful memories are associated with this tune and I love playing it.

A very nice tune made popular by De Dannan in the 70s. In my time with Clann Eadair it was one of our favourite tunes, as our playing was very influenced by De Dannan.

A well-known tune which I picked up in sessions in West Cork and Galway.

I first heard this tune played by piper John Mc Sherry many years ago. This is my own version, and this particular arrangement gives it a Caribbean feel. We also call this set of reels The Caribbean Set.

This was a very popular tune here in Ireland for a while. I learned it from the double album ‘Bring It All Back Home’ where it was played by Sharon Shannon, Owen O’Neil and Mary Custy. On that album it is part of a set of reels called Kevin Griffin’s.

I learned this tune from the great recordings of the Bothy Band.

I asked John Sheahan to give me a selection of his compositions to consider from his album, and when I came across ‘Highland Snow’, I was immediately attracted to it. John wrote this piece during a snowstorm about 20 years ago. By the time he was finished writing the tune he was totally snowed in, and the tune has developed a Scottish flavour. Hence the name ‘Highland Snow’.

I learned this tune from Planxty

I originally heard this tune on an early recording from County Clare.

This is a Scottish jig that I picked up in Neachtain’s pub in Galway.

I learned this tune from Planxty, when it was performed by Liam O’Flynn. It was originally collected by Edward Bunting. Bunting does not state where he got the air from, but it has been attributed to Carolan.

Thanks to Glen Cumisky and The Traditional Music Archive, Dublin ;Jim Fitzpatrick; Jane Bolton, Sandy, Eoghan and Finbar from Claddagh Records; and to Thomas O’Connor for his brilliant engineering and tremendously fast work. My thanks to Leo Rickard for his help and his musical contribution; Johnny Coakely from Bantry for the background on Paddy Taylor’s, my son Liam for his patience with me; Jimmy Barrett for his constant encouragement; Frances Murphy for her tremendous generosity, Paul Redmond at Tunnel Studio for always being positive and supportive. Major thanks to my mother, Eva Buhe for her financial support, to Brendan and Siobhan Harding, Willy Schwartz, Jens Kommnick, Peter Jack, Ingolf Kurkowski, Paul Byrne and Lochlainn Cullen for playing on this album and for being available on such short notice. A big, big thank you to Eileen Cook from Main Street Howth, for coming up with the title of this album; Maria Aford and Vincent Fitzgerald from Howth Digital Print; Eugene O’Leary, Christine and Garvan Moore; Micheal Howard from Howth, and Monseigneur Houlihan from Howth. Very special thanks to Ian Melrose for his time, concentration, loyalty and good humour and for making this album possible. And a huge thank you to John Sheahan for being on this album and for all his support and his help with the sleeve-notes.

This album is dedicated to my son Liam, to my family Eva, Stefan, Regina and Julian Buhe and to my late father Klaus Buhe.